For the pleasure of their spiritual master, Srila A.C. Bhaktivedanta Swami Prabhupada, in the 1980s some young and idealistic men and women in North America left their homes in the cities and headed for the countryside, a spiritual frontier where they could depend on the godly gifts of nature. After much searching, this small group found many acres of open fields, foothills, forests, three lakes and a creek, cradled in the rain shadow of British Columbia's Coastal Mountains.  Venables valley was once summer hunting grounds for native Indians and in the 1930s became the home of Chinese immigrants.

The city-born neo-pioneers pooled their money and made a down payment on the land. In 1990 they paid it off and now fully own Saranagati, the valley where one is invited to live in harmony with nature and with one's higher, spiritual purposes.

Here they have built their own homes; piped in gravity-fed water from the mountain creeks; created their own electricity from generators, solar panels or hydro systems; set up a K-12 school for their children; gardened; farmed; and had festivals, feasts, parties, plays, puppet shows, musical dramas, readings, retreats, discourses and daily Deity worship.

Here they offered their spiritual master their very way of life for they had created it under his directions. 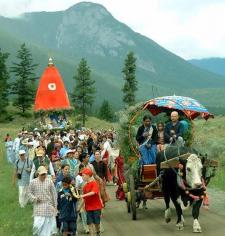 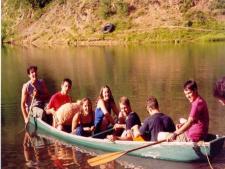 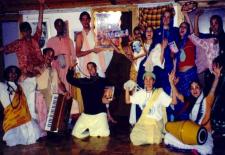