Bhumi Farm Organics is off the grid farm beside Saranagati Village.  They use irrigation water and domestic electricity are pumped by a micro-hydro installation. Bhumi Farm specializes in crops that thrive in the region’s unique short dry season with snow on the ground from October until April. Their primary crops are horseradish, rhubarb, and “sunchokes,” also known as jerusalem artichokes.

Over 5 years, they have developed a sustainable forestry plan for their  2000 acre woodlot made up of thick stands of scrub pine. They makes fence-posts and rails from the harvested wood with the intention of setting up a treatment facility to process them organically on a commercial scale. They plan to supply organic farms with an economical alternative to fence-posts treated with heavy metals, which aren’t allowed under organic standards. 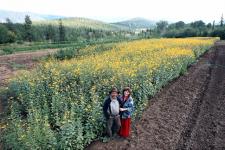